Within 12 hours, I was involved in two moments of public outcry, of organized protests. At the first one, I was the one (or one of the ones) being protested, while in the second I stood on the other side of the signs attempting to give witness to injustice. It’s been a very odd couple of days.

Last night, the Diocese of Texas hosted the Texas Night Backyard Barbecue to welcome all the bishops, deputies, alternates and friends who are visiting Austin for the 79th General Convention of the Episcopal Church.  We boarded buses for the short trip to the event site and, at the outskirts of this joyful gathering, which included about 8,000 Episcopalians who started with a Revival Worship Service, were a handful of protesters, perhaps two dozen.  They were an a cluster, surrounded by police officers on bicycles. 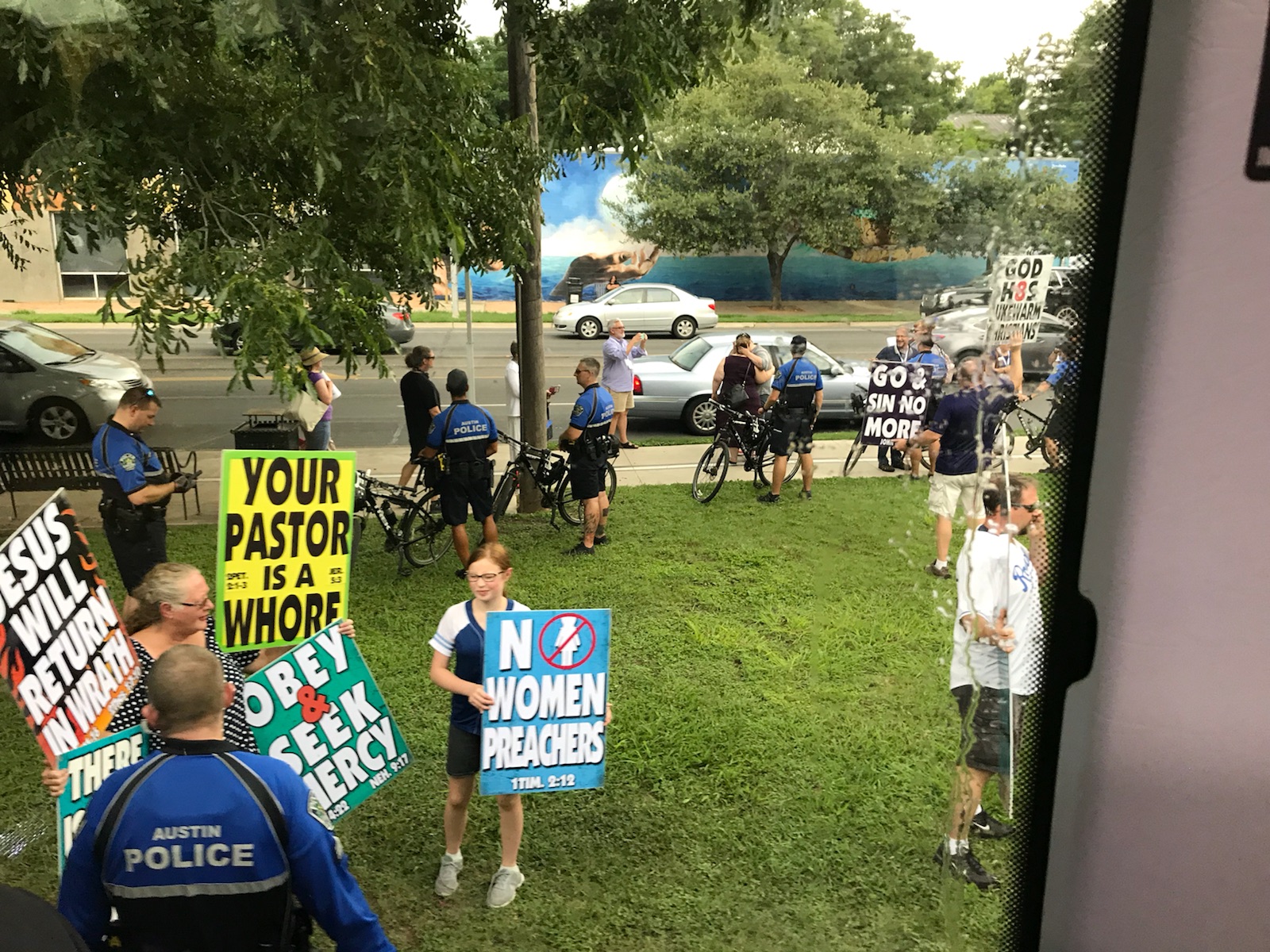 What had happened to cause these people (who included men, women and children) to be willing to stand in the heat for hours? The activities of this Episcopal Church. We ordain women. We recognize the abiding love of homosexual couples in marriage. We read and inwardly digest holy scripture within the context of both history and our present time.  These seemed to be the biggest issues, but I’m sure there are others.

For two and a half hours, we sang songs like “We are marching in the light of God,” “Every time I feel the spirit moving,” and “I have decided to follow Jesus.” We listened to the scriptures being read (in English and Spanish) and then the Rt. Rev. Michael Curry (who had been dancing up a storm during the hymns) addressed the gathered with a sermon.

His text was the last verse of chapter 20 of the Gospel of John: “But these are written so that you may come to believe that Jesus is the Messiah, the Son of God, and that through believing you may have life in his name.” I wish that I could share the sermon in its entirety as it made us laugh, and cry, and long for time with God. In good Revival style,  it lasted 45 minutes. The crux of it though was this: God wants us to have life (abundant, real life!) and the way to life is through love.  Then we prayed and anyone who wanted healing went to stations to have more prayers said.  Finally, we recommitted ourselves to the work of the Gospel and went, singing, to enjoy barbecue.

Today, we got on buses again…this time for a much longer ride, about 40 minutes. In all, we filled 16 buses…that’s about 800 people.  We went to the T. Don Hutto Residential Center, which is a “guarded, fenced-in, multi-purpose center currently used to detain non-US citizens awaiting the outcome of their immigration status,” according to Wikapeadia. Once a place that housed families, this center now houses only women. We gathered in vigil, giving witness to the plight of women who have been detained and, often, been separated from their children. Some vigil attendees brought signs and posters with them, but all of us carried compassionate hearts.

Again, we sang and we prayed, faithfully believing that simply showing up makes a difference. The signs contained loving and life-giving messages. “The Episcopal Church is here” and “The Episcopal Church cares.”  Bishop Marc and Sheila Andrus, of the Diocese of California,  made their way to the front of the facility and encouraged us to follow.  We walked along the road carefully, not wanting to stray either onto the private property of the facility or to block the road for vehicles trying to come and go. Several police cars arrived, but they seemed intent only on ensuring order (despite jokes going up and down the line about how much money it would take to make bail for such a large swathe of the church).

The building was imposing and stark. The parking lot was nearly deserted (since it is a Sunday). We gathered near the entrance… and I felt so helpless. It’s such a big place. It was so forbidding with its walls and fences and tall narrow windows.

We sang many decades old songs sung by protesters: “We shall over come” and “Amazing grace.” In a way, being there was heartbreaking…because it was so clear that there was so little that we could do. Could these women see us through the narrow windows or hear us through the thick walls?  Was there any way that our witness could turn the hearts of those in power? And then we saw it…. tiny hands waving at the windows…and a white cloth being slid up and down the window pain like a signal flag.  The women knew we were there!

Together, we shouted even louder over and over again:

“You are not alone!”

“You are not alone!”

“YOU ARE NOT ALONE!”

And we waved back wildly.  And I cried. These people, who we call “refugees” and “immigrants” are part of our human family.  They are people who want freedom, family, and peace. These people who are called “guards” and “officers” are part of our human family.  They are doing a hard job the best they know how. I know that our country is afraid. We are afraid of those we believe are “the other”.  I know that we instinctually fear that there is not enough to go around. We can make political arguments. We can create laws. We can arrest people in crisis. None of it changes the truth: This is not the behavior that God wants from us. We have to do better.

One song that we sang both last night and today is one that I’ve known for my whole life “They will know we are Christian’s by our love.” I think this is the measuring stick we must apply to ourselves.  As a great preacher said to me yesterday, love is what brings us life and God wants us to be alive. We have to love each other.  I ask you.. Which of these says love to you?