Invariably, when we meet little kids, adults say “So, what are you going to be when you grow up?”  Maybe because it’s so fun to hear about the audacious go

als our young people are setting for themselves.  They want to be dancers, football players, super heroes, police officers, doctors, and one little girl i talked to told me quite seriously that she was going to be a unicorn when she grew up.

I once went and heard a comedian who talked about the way that parents analyze their kids talents and abilities. It was a long time ago but it stuck in my head. He said, “Do you ever notice that when a kid is finger painting with his strained peas or coloring on the wall with the crayons, the parents proudly say “Look, he’s going to be a great artist!” It’s interesting that they never say “Look, he’s going to be a house painter!”

It doesn’t surprise me. That little kids want to be unicorns and that parents see their kids as world changing healers, protectors, creators of beauty, and more.

You see we are born with the potential to be who God has made us to be, who God calls us to be. Our parents watched us and we watch the kids we love for signs of that identity, for hints of who they are meant to be. What on the surface is a question of vocation truly is a question of identity.

Today, on this last Sunday of Advent, as we wait for the birth of the savior, we hear a little about Joseph, who so often is just a footnote in the Christmas story. Often, we think of him as the guy who leads Mary on a donkey searching for room at an inn. 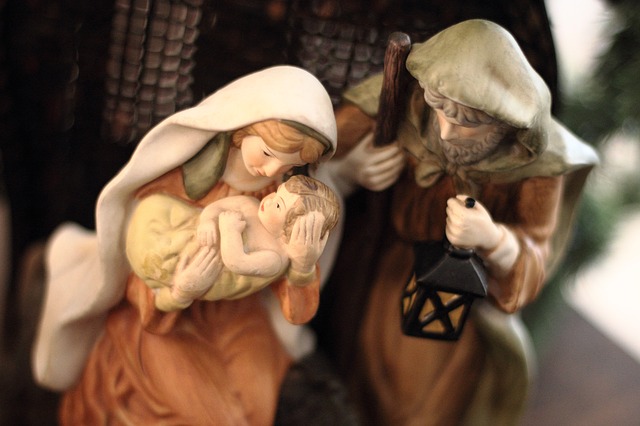 Joseph’s parents probably didn’t wonder what he would be when he grew up. They knew that he would be a carpenter. Probably his father was a carpenter, and we know that Jesus followed his example and learned the trade himself.  This story doesn’t say that he was a carpenter, though. Instead we hear that Joseph is a righteous man. That is his identity. The word righteous in the New Testament comes from the Greek word “dikaios” which means observing divine laws or to be upright, faultless, innocent, and guiltless.  A shorter way to say it is morally justifiable.

When Joseph learned that Mary was going to have a child, he decided to react out of that identity as a righteous man. He would dismiss her quietly, quietly in an effort to minimize the scandal and attention to her, He was being righteous, measuring his decisions based on the yardstick of his time. Then an angel came to him and said “do not be afraid to take Mary as your wife.” Suddenly, he is face with a choice: is he going to be the person that his culture, his family, his friends expect him to be? Or is he going to be  the person that God wants him to be? In the end, he chooses divine law over manmade customs. He chose to be a righteous man who listens to God.

This is a critical question, this decision of who we will choose to be and how we will choose to live that out. Recently, I went and saw the movie Moana.  I really enjoyed this movie, but i’ll try not to give any spoilers while I make my point. The movie begins with Gramma Tala telling a group of children a story from a thousand years ago. It’s the tale of the island goddess Te Fiti and how a demigod Maui stole her heart, literally took the essence of her heart away with him.

That loss put everyone in jeopardy, and started draining the life from the islands. Gramma Tala tells the children that one day a hero will journey beyond the reef, find Maui and sail with him across the ocean to restore the heart and save everyone. The chief of the tribe appears and admonishes her, saying that everyone must stay inside the reef to be safe.  One of the littlest girls, Moana, is fascinated by the story and by the ocean. It turns out that she is the chiefs daughter and destined to rule and care for the island and all its people.

Moana spends the next years of her life between the duty that she feels to the island and it’s people, the job that she has been told is to be hers, and the deep longing she feels to sail on the ocean and go beyond the reef, against all the wisdom of the tribe. In the deepest part of herself, she knows that she has been chosen for the ocean and that her identity lies in going beyond the reef.

The reason Disney movies are so popular is that they capture essential truths. In some way, all of us are, at one time or another, is asked to choose between who the world tells us we should be and who we know that we have been made to be. We realize, for example, that being a unicorn doesn’t pay the rent. Too often, we decide that we have to take on and limit ourselves to a secular identity, instead of embracing that which we are made to be.

One of the biggest lessons that can be taken from the Moana movie, though, is that, if you always strive to be who you are made to be, you find yourself being better suited and ready to do whatever duties that the world puts on you. It’s an important message for this time in the world.

If vocation is what we do, then perhaps identity is how we do what we do. We need both. If worldly standards are the minimum, the broad outline of what we should and should not do, then God’s direction brings us to the place where things work out in ways that are richer and broader and more transformative than we could ever imagine.

For example, our vocation here at the Church of the Epiphany is to be the presence of Christ in this place at this time. Many, many churches can say that. And yet, we have our own unique way of living out our vocation.  Our identity is founded in being a people of welcome, a people who protect and care for children, people who always strive to reach out to support the dignity of others, to protect those who are at risk.  Our identity is how we bring light into the world.

The same is true in our lives. Our identity helps us to craft how we are in relationship with others, whether with neighbors or with colleagues at work. Our identity informs how we do what we do, and the spirit that we bring to it.  What might that look like? Consider a salesperson. The business world says that the job of a salesperson is to sell, to sell whatever the company makes, and preferably whatever might earn the highest profit margin.  That is the worldly standard for the occupation.

Now consider the salesperson who has, as Joseph did, the identity of the righteous person. That seller might make an effort to get to know the customer, and match the product to the need. That salesperson might ask what their budget is and work hard to point them toward the products that might give them the most for their money. Both are sales people. One has an identity as a successful seller in worldly terms, and the other, perhaps, thinks of themselves as someone who helps people. Same vocation, different identity.  And in the end, who would you choose to work with?

This Advent season, we’ve spent time in quiet, and in listening. We have been watching and waiting. We have been listening for God’s voice telling us what we should do. We have a few more days of waiting time, some time to ask ourselves a question that is more important that “What do I want to be when you grow up?” Ask yourself:

Whether you are a helper, a caregiver, a builder, a dreamer, a maker of beautiful things, a teller of true stories, a knower of great truths, a healer of deep hurts, a teacher of profound lessons, or whatever else, then set out to be that in everything you do. And know that  that is enough to change the world.

The Rev. Hailey McKeefry Delmas preached this sermon at the Church of the Epiphany in San Carlos on December 19, 2016 (Advent IV, Year A).