In the Episcopal Church, there hasn’t traditionally been a huge focus on memorizing versus of scripture. And yet, there are a few verses of scripture that are so well known that we recognize when someone says the chapter and verse.

I checked some sources, and John 3:16 came in fourth on the list the most referred to bible verses. In the top spot, a new verse appeared in the listing, Joshua 1:9 which reads “Have I not commanded you? Be strong and courageous. Do not be afraid; do not be discouraged, for the Lord your God will be with you wherever you go.” That perhaps is a sign of the times.

Next in the list were the 23rd Psalm (The Lord is my shepherd, I shall not want) and 1 Corinthians 3:13 (Love is patient, love is kind. It does not boast.) That makes sense…. We hear the 23rd Psalm at just about every funeral, and I think that almost as many weddings I’ve attended have used the Corinthians. That put John 3:16 as fourth in the ranking. 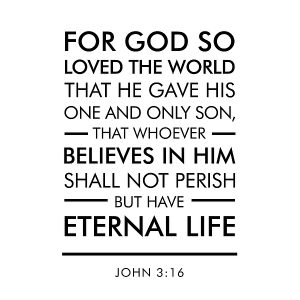 John 3:16 is an every day bible verse for people of faith. The Bible Gateway, which offers more than 200 versions of the Bible 70 languages, placed it in the very top spot as the most read bible verses.

I’ve seen John 3:16 on bumper stickers and protest signs.  I think that perhaps this verse has become the shorthand for what Christians believe, the truth that is behind and underneath the Christian faith: “For God so loved the world that he gave his only Son, so that everyone who believes in him may not perish but may have eternal life.”

It’s an important verse…and one that we should remember always. It’s often been used to exclude people, but I read it as much more embracing of all people. God loved us enough to be human. God loves us so much that he wanted every living creature to have a chance to flourish. God wants us to live with joy and everlasting life.

John 3:16 is the verse that is the anchor of our faith, the thing that roots us with God. A verse that follows just after that, though, verse is the one that gives our faith wings. John 3:21 says this:  “But those who do what is true come to the light, so that it may be clearly seen that their deeds have been done in God.” 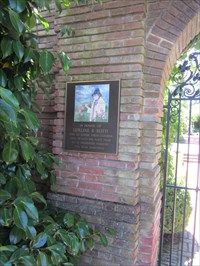 I never paid much attention to that verse…but then I visited the Filoli center. As I walked through the garden enjoying the riot of flowers, I noticed a beautiful painted tile plaque on the wall. It had a picture of an older woman in glasses and a sun hat and it said “In honor of Lurline B. Roth who so loved these gardens that in 1975 she gave them to be preserved forever for your enjoyment.”

That’s when it hit me: John 3:16 tells us what God has done for us, but that leaves wide open the question of how we are going to respond to it or, to use John’s language “What will we bring into the light so that the world might that we have done it in in God?”

To put it even more simply, what do you want written on your plaque? I know that’s a big question—and perhaps a little overwhelming at first glance. The answer is pretty simple though: Do whatever God formed you to do and do it in the context of community.

Yesterday, hundreds of people gathered to assemble meals. On the face of it, it answered the Gospel call to feed the hungry.  The event had a goal to make 50,000 meals that would feed people in both San Mateo county and Haiti. But it did more than that. It created 50,000 reminders to suffering people that someone cares. It created 50,000 examples of how a few dollars or even cents, given to a good cause, can make things happen. It gave hundreds of people an opportunity, in the context of the whole community, to make a discernible difference to the world. It offered high school students a clear example and opportunity of what it feels like to serve others.

Each of us is built with gifts, abilities and interests that give us joy—and by following that joy we become more of what God made us to be. Howard Thurman, African American author, philosopher, theologian, educator and civil rights leader explained it this way “Don’t ask what the world needs. Ask what makes you come alive and go and do it. Because what the world needs is more people who have come alive.”

The beauty of Thurman’s idea is that inherently if we do what makes us come alive—it will inevitably make our community and our world better. 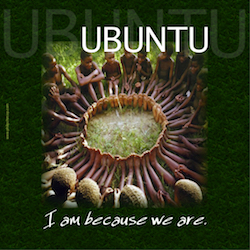 It reminded me of a story I heard not too long ago. “An anthropologist proposed a game to African tribe kids. He put a basket full of fruit near a tree and told them that whoever got there first won the sweet fruits. When he told them to run they all took each other’s hands and ran together, then sat together enjoying their treats. When he asked them why they had run like that as one could have had all the fruits for himself they said: ubuntu, how can one of us be happy if all the other ones are sad? Ubuntu in that culture means: “I am because we are.”

As a faith community, this is perhaps what our plaque would say: “Transfiguration so loved to world that it created light and space that allowed all who came through the doors live, love, and be in ways that allowed them to grow in God.”

And so, that’s it in a nutshell: God loves you… what are you going to do about it? What will you write on the plaque of your life? Whatever you decide, why not start today?