Not too long ago, on a Monday morning, I logged into my work computer to find an email from my boss. It said that I was in violation of my organization’s social media policy and that I needed to remove the offending post from my LinkedIn account immediately.  The problem, the email said, was that I had linked their company identity with this objectionable content. Then there was a screenshot of the problematic post: a link to a sermon that I had preached here at Epiphany.

Initially, I was crushed. I felt guilty and upset that I had been identified as a trouble maker. I felt afraid that my job might be in trouble. I questioned my own judgement because the email had questioned my sense of professionalism in posting potentially offensive material.

Then I got angry.  I called a couple of human resources professionals I know to find out if the company was allowed to make this kind of demand. I wondered if I should sue somebody or maybe quit. Over the course of the next few days and even weeks, I had made it through all the stages of grief: denial, anger, bargaining, depression, and acceptance.

When I finally had enough distance to step back from the situation, I asked myself why such a relatively minor moment in the big scheme of things had hooked me in such a profound way.  The answer: it was an experience that had attacked my identity, the identity that I had formed as a follower of Jesus Christ.

Today’s Gospel, at its heart, is about identity.  Jesus asked his disciples, “Who do you say that I am?” Peter answered him, “You are the Messiah.” With those words, Peter identified Jesus’ identity correctly for the first time in the Gospels. It is a story that is included in all three of the synoptic gospels (Matthew, Mark, and Luke).

Next, Jesus tells the crowd and his disciples what it means when we forge our own identities as followers of the Messiah: “If any want to become my followers, let them deny themselves and take up their cross and follow me.”

So what does it mean to pick up our cross and walk in the steps of Jesus. I think that, at least for me, the mind goes immediately to the crucifixion—Jesus hung on a cross, a picture of profound suffering and love. And yet, so much more happens in the story between the moment that the cross is laid on Jesus and the moment that he takes his last breath… and of course, we also have the resurrection that is certainly part of the story. A commentary on this passage summed it up beautifully—it says that the names of Jesus are code words for the stories of how salvation comes to be present in human life through Jesus.

So how do we pick up the cross? How do we follow Jesus? How do we make that our primary identity?  We have, hanging her in the church, a way to think about the story step by step—so let’s use the stations of the cross as a way of answering those questions for ourselves: 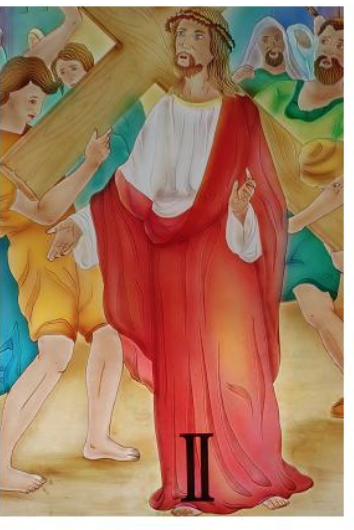 We encounter the cross for the first time at the second station. The heavy crossbar of wood is laid on Jesus’ shoulders. His humanity means that he feels its crushing weight—and the fear and sadness of being judged. When we build our identity in Christ, we face that reality that suffering is part of being human even as we sacrifice our own self interest to commit to the will of God. Archbishop Desmond Tutu said: Dear child of god, I am sorry to say that suffering is not optional. When we pick up the cross, we have faith that our suffering will be somehow transformed. 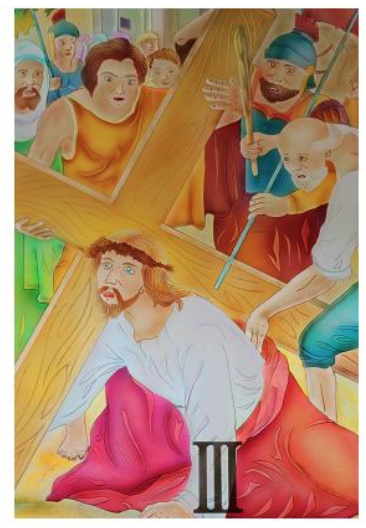 Under the weight of the cross, Jesus stumbles and falls. He hits the ground, understanding that he is weak and powerless in the face of worldly power.  His heart, perhaps, reached out to God. Author Ole Hallesby said: “Helplessness is your best prayer. It calls from your heart to the heart of God with greater effect than all your uttered pleas.” When we pick up the cross, we recognize our own helplessness and reach out to God. 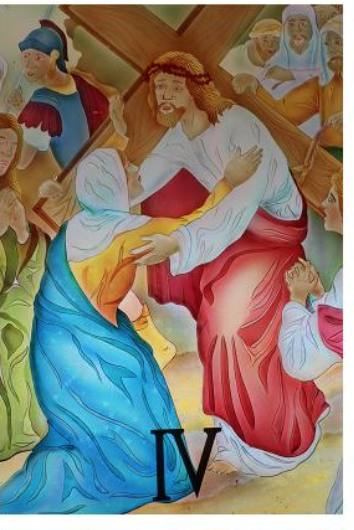 In the midst of his suffering, Jesus meets the woman who submitted to God’s will to bring him into the world. Even in this terrible moment, she is there to witness his life and his death. Poet Helen Rice said “A mother’s love is patient and forgiving when all others are forsaking, it never fails or falters, even though the heart is breaking.” When we pick up the cross, we commit to loving Christ beyond all reason, even when it breaks our hearts.

In his humanity, Jesus is not able to carry the cross alone. Heneeds someone to help. Simon of Cyrene steps in and takes at least part of the burden from Jesus. Novelist Charles Dickens said: “No one is useless in this world who lightens the burdens of another.” When we pick up the cross, we promise to help others when they are in their darkest moments, when they have no hope. 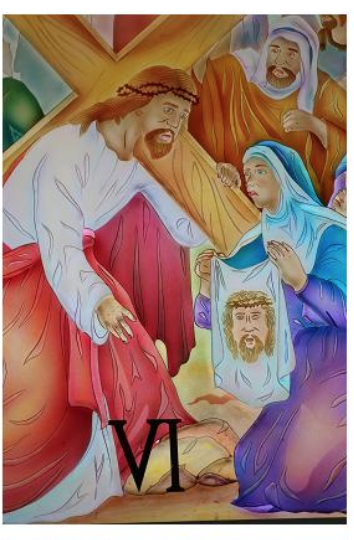 The Sixth Station: Veronica Wipes the Face of Jesus.

In the midst of injustice and rejection, Jesus struggles. He has been whipped and beaten.  Veronica steps forward in compassion to wipe the blood and sweat from his face with her veil. German theologian Albert Schweitzer said “The purpose of human life is to serve, and to show compassion and the will to help others.” When we pick up the cross, we commit to acts of compassion, to helping those in need whenever and wherever we find them. 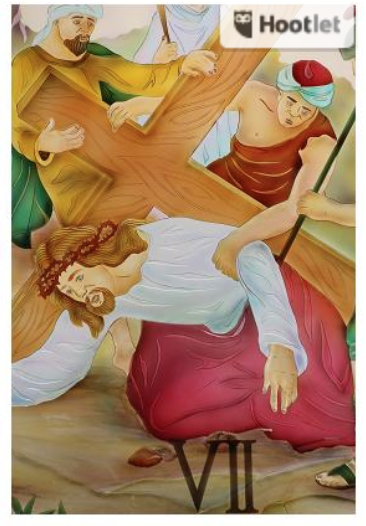 Even with help, Jesus stumbles and falls to the ground.  In deep exhaustion, he stares at the earth beneath him. He knows that he walks toward death. “Remember, you are dust and to dust you will return.”  Jesus has seen death before—and knows it is a small part of a bigger story. American author Norman Cousins said: “Death is not the greatest loss in life. The greatest loss is what dies inside us while we live.” When we pick up our cross, we understand that human death is not defeat…and that what lives with in us is what will make a difference.

The Eighth Station: Jesus Meets the Women of Jerusalem.

The women know Jesus, and know the healing and freedom and love that he preaches. They have seen and felt the power of God in his ministry. They are connected to him and he is connected with them. Together, they enter into the terrible moment. American philosopher William A. Dembski said: “In God becoming human in Jesus Christ, God has established solidarity with the human condition.”  When we pick up our cross, we come to understand that real change comes when we work together in cooperation with God.

This last fall devastates Jesus. He collapses under the weight of the cross. He  knows, though, that the story is not over—and so he lets his executioners drag him to his feet and take him to where he will be crucified. British statesman Winston Churchill said: “Success is not final, failure is not fatal: it is the courage to continue that counts.” When we pick up the cross, we commit to perseverance, to follow the call of God until the end.

The Tenth Station: Jesus is Stripped.

At the site of the crucifixion, the soldiers take Jesus’ clothes from him. The indignity and vulnerability are overwhelming. He is completely defenseless. American journalist Bill O’Reilly said: “The measure of a decent human being is how he or she treats the defenseless.” When we pick up our cross, we allow ourselves to become defenseless to the will of God and we promise to defend the vulnerable from the world.

The Eleventh Station: Jesus is Nailed to the Cross.

The blood flows from Jesus’ hands and feet as the metal stakes are driven through his flesh. He is lifted up on the cross and the weight of his own body deprives him of life-giving breath. Jesus is burdened by humanity—and embracing the holy work of salvation. Greek poet Sophocles said: “A human being is only breath and shadow.” When we pick up our cross, we offer our humanity to God in hopes that we will be transformed.

The Twelfth Station: Jesus Dies On The Cross.

Hanging between two criminals with a mocking title “This is the King of the Jews” hanging above his head, Jesus dies. His mother Mary, and the disciple John and Mary Magdalene stand witness. Jesus surrenders his last breath:  “Into your hands I commend my spirit.” Musician Lawrence Welk said; “Love people, but put your full trust only in God.” When we pick up our cross, we put our trusts fully in God to the end.

The Rest of the Story: The Resurrection

We believe that Jesus’ death was not the end of the story. Instead, it is a promise that reaches back into history and forever into the future. It tells us who God is, but also who we ourselves are. Theologian Rene Girard said; “The true Resurrection is based not on the mythical lie of the guilty victim who deserves to die, but on the rectification of that lie, which comes from the true God and which reopens channels of communication mankind itself had closed through self-imprisonment in its own violent cultures.” When we pick up our cross, we commit to engaging in building the kingdom of God in this moment in time, even in the face of rage and hopelessness.

As for me, on LinkedIn, I am no longer listed at Hailey McKeefry, along with my job title and company name. Instead, my subject line reads: Hailey McKeefry, Episcopal deacon and high-tech journalist. I learned that my job is not who I am…My walk with God is what defines my identity.

Preached by the Rev. Hailey McKeefry Delmas, at the Episcopal Church of the Epiphany in San Carlos, CA, on September 15, 2018.